For tickets to the main event please click HERE 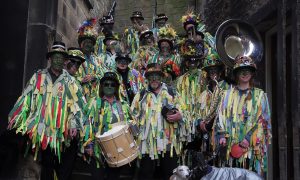 Bourne Borderers Morris is a mixed side from Bourne in Lincolnshire, performing stick dances based on the few recorded traditional dances from the counties of Herefordshire, Shropshire, and Worcestershire along the Welsh Border, known as Welsh Border Morris.

The side was formed in 1992, and for the last 37 years have been delighting audiences with their loud, energetic and colourful dancing

The team dances in distinctive green and yellow tattercoats, top hats, bells and green faces.  A disguised face is a common feature among Border Morris sides; there are several possible explanations, but it certainly dates back to Victorian times when the Border Morris dancers were seasonal workers who would supplement their meagre incomes in Winter by dancing and inviting donations from the audience.  This was considered begging, and disguising their faces was thought to help prevent the dancers from being recognised when the authorities arrived.
Website 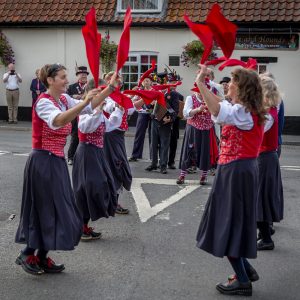 Crosskey was formed in 1982 by the Peterborough dancers of Northampton based clog side Poly Olbion. They, having danced with Poly Olbion for some time, decided to form a local side. Dancing in the Northwest tradition of morris, i.e. with traditional English clogs (not to be confused with Dutch clogs, that’s a whole new ballgame.. !!) Kit is distinctive red and navy plus a leather badge showing the crossed keys, these being part of Peterborough City’s Coat of Arms and symbolises St.Peter’s role as the keeper of the keys to heaven.
Website 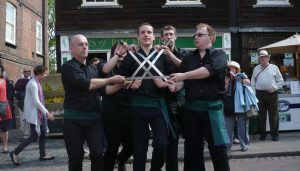 Rockingham Rapper formed in October 2004 and we take our name from the Rockingham Forest of Northamptonshire, near to our first practice venue. The team performs Rapper sword dances based on the North East of England traditions and Appalachian step dances. We are regulars at festivals and events all around the country and have even won a prize or two over the years. In 2011 Rockingham competed in the annual Dancing England Rapper Tournament (DERT) in Oxford finishing third in the Open Class. The team have won other prizes, taking the title “most entertaining dance side”  and “best song” accolade at the Moira Canal Festival 2011, 2012 and 2014 along with the additional prize of “Best Solo Dance”.

Recently the team won the “Evesham Stick” for the best dance group at the Vale of Evesham National Morris Weekend. We are probably the only dance side to incorporate Queen and Gilbert & Sullivan into our musical repertoire.