Tickets for The Lock In ‘Christmas Carol’ available here: https://www.stanleyhalls.org.uk/whats-on/ 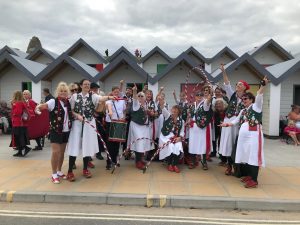 Old Palace Clog is a women’s traditional North-West Clog dance group which started up way back in the 1980s, so we’re quite traditional 🙂

We practise every Thursday from 8:00pm to 10:00pm in the autumn and winter. During spring and summer we often dance out on Thursday evenings as well as at the weekend at local hostelries and events and also at various Folk Festivals. 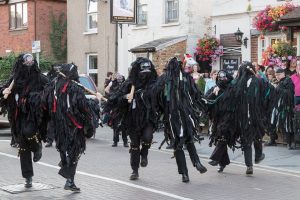 The side was formed in September 1991, meeting appropriately in the shadow of a hill known as Bedlams Bank at Merstham, Surrey. We are a ‘mixed’ side affiliated to the Morris Federation with men and women dancers and musicians.

We aim to perform about twice a month throughout most of the year. In addition to performing at local pubs, hosting of own day of dance and joining other sides to dance we also take part in Folk Festivals and other events around the country.

We wear masks as a form of disguise, historically to prevent identification when dancing for money.  Our coats, known as ‘tatters’ are jackets of strips of cloth.

Pennyroyal is a traditional clog stepping dance group based in Carshalton, Surrey.

Although step dancing in hard shoes is common in many parts of Britain, clog dancing originated in the industrial north of England in the 19th century, where clogs were the everyday footwear of working people.